by blurymind in Render Setups

Sprite Render Kit is a sprite rendering system for Blender - specifically designed for rendering animated and static sprites for 2d games.
Its benefits become most obvious when you need to create a sprite with 4 or 8 directions of animation. It's main goal is to save you time!
It works with Blender internal, OpenGL, Cycles and Freestyle. The script can be easily extended to sync scenes for other render engines. 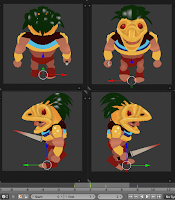 - A Scene Setup - Created to allow Blender to render an animated model from 4 different angles simultaneously.
- It is made out of one main scene (where you set your settings) and 3 more scenes for the remaining camera angles!
- The work Layout is created in a way that allows the user to conveniently view the model from all the 4 target rendering angles on one screen.

- A Camera Rig, capable of simultaneously controlling all 4 cameras:
- Designed for Rendering an animated model from 4 different directions
- In ortographic or perspective mode (Ortographic is recommended)
- Tweak the center and angle of rendering with easy to use controlers
- Control zoom level
- Control render angle (45 degrees = isometric)
- Control the height angle of all cameras or on a per camera basis
- Control an offset on the left and right cameras - easier to center the model

- A node output setup - capable of rendering all sprites to a dedicated directory -set with proper naming conventions.

BONUS: Included with the Kit is the example-mayan-bad.blend file that is used in the tutorial. feel free to play with it and test everything.