Turbo tools is a Blender addon written for Blender 2.93 to 3.0 Alpha.  It's aimed at turbocharging and adding new functionality to various areas of Blender.

V1 focuses on the compositor, and new functionality/updates will continue to be added to this and other areas of blender (rendering, geometry, shading, import/export).

Single purchase will give you lifetime access to all future updates!

The blender compositor is where you can take a turd and polish it into something exceptional.  The pros don't spend hours trying to get everything right in the 3d viewport, or spend huge amounts of time re-rendering every time a client needs an amendment.  Instead the majority of the work to get a render looking incredible, is carried out in the compositor.  This is why at the last Blender conference, the entire audience voted that the compositor be the next focus for development. V1 of this addon addresses many of those needs by adding :

Add, tweak, and cache all in real time.

One of the longest requested features for blender is to be able to resave a file output node without having to re-render the 3d scene....well now you can!  Even better, this feature isn't limited to single frames, you can actually resave all frames in a single click.

Not only that, you can also press a single button to generate and wire up file output nodes with the output destination automatically populated too!

Using quality nodes and the interactive playback quality slider, you can reduce the burden on your system until FPS reaches the required speed.  Additionally, control the resolution of cache files for further speed-ups.

One click publishing temporarily discards any cache and exports your node tree at full quality to a movie file or image sequence.  This can be done as many times as necessary as it doesn't require the 3d scene to be re-rendered.  Audio can be included in the resulting file by adding the audio strip to the VSE.

It just works!  Even on existing node trees, it will automatically add and rewire the necessary components for you.

Note:  The compositor will only update if there is a cache node present, or if there is not a render layer node present (if you want to composite imported image sequences for example).

For best performance, place a cache node after the render layer node before rendering, this will generate lower quality cache in addition to the full quality render layer cache.

For still images, cache can be updated by clicking 'refresh all', or 'refresh selected and upstream' (to avoid recalculating downstream cache).

Cache will automatically recalculate during playback, if the addon senses that any parameters downstream of a cache node have changed.  Additionally if you have a cache node in place before rendering, then the cache will  be calculated during the rendering process with no impact on rendering speed.  This will allow for immediate playback directly after rendering.

To force recalculation during playback (if you've changed something other than a node parameter such as resolution), you can select cache nodes and click 'clear cache of selected'.

The render layer cache will always be at full resolution, and is associated with the scene, camera and view layer.  Changing the scene camera will automatically load the cache file for that camera next time you refresh or press play, or if that camera has not yet been rendered, you'll be presented with a message asking you to do so (or alternatively change the scene camera and render layer settings to match the render you want to composite). 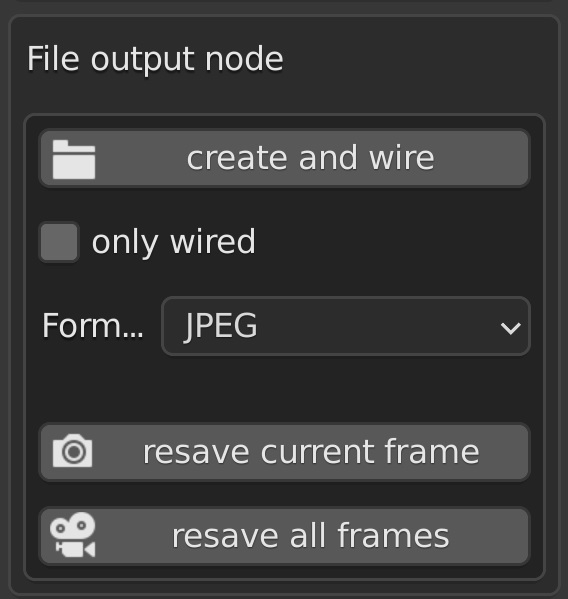 You can select a node or multiple nodes, then hit 'create and wire'.  This will generate a file output node for each selected  node, automatically create the links, and specify a directory and file name to save to.

The only wired option will only wire up the sockets on the selected node, if the socket already has a link.

Select the file output nodes that you want to generate new images, and then either click resave current frame, or resave all frames (creates an image sequence for the entire animation length as set in the render properties) 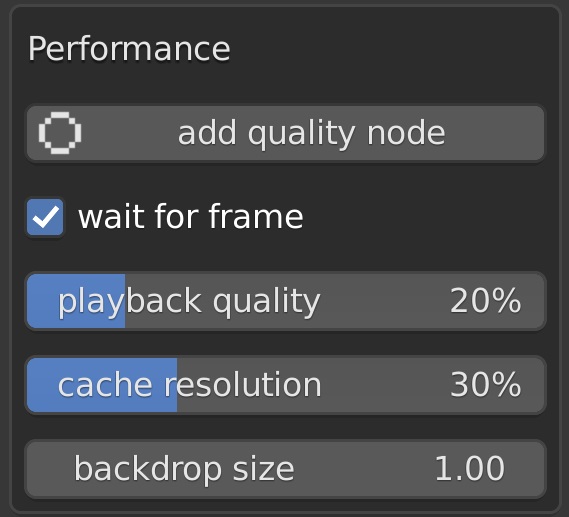 The add quality node should be placed before the viewer node, and also before any complicated nodes that you would like to speed up during playback.

This is only used during playback and saving file output nodes.  During rendering and publishing the tree will revert to full quality.

Forces the timeline to wait for the compositor to finish processing the current frame.  Best left on for smooth playback with no artefacts.

Controls the resolution output by the quality nodes.  Lower values will reduce the amount of work upstream nodes need to do.

Standard cache node resolution is controlled by the cache resolution slider. This will need to be set appropriately for your system. On a i7 7700k 30% provided fast FPS when the main render output was set to 1920 x 1080. 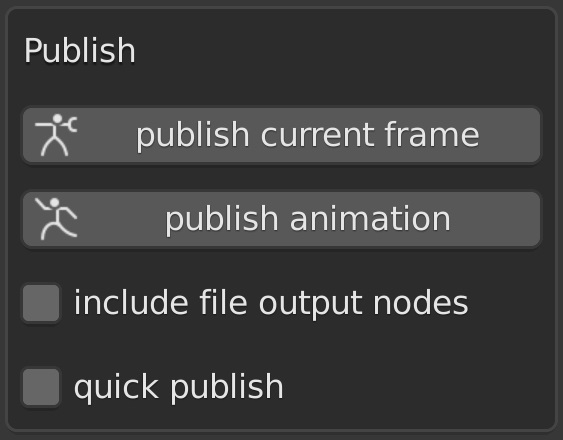 Publishing will temporarily disable the cache, and save the frame or animation with the location and format specified in Blender's output settings.  Audio will also be included in any movie formats if you have audio in the VSE (ensure no video is present in the VSE otherwise it will take precedence over the compositor).

With this option enabled any unmuted file output node will generate a new image sequence at full resolution (handy if you want to generate multiple variations).  Note that only the active composite node can generate movie files with audio.